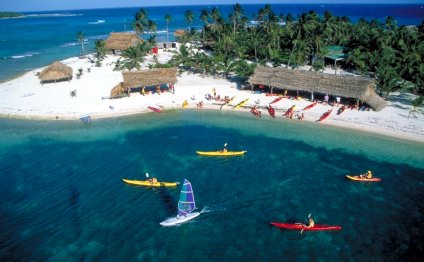 Belize is a small country attracting many visitors mainly thanks to its sparkling turquoise tropical waters and a plethora of diving and snorkelling opportunities.

It stands out from its neighbouring countries as being the only one to have English as its official language (instead of Spanish). Belize also has a decidedly Afro-Caribbean feel, which is a fun change of setting if you are coming to Belize from Mexico or Guatemala.

Why you should visit Belize The island of Caye Caulker, where the motto is ‘Go Slow’

Cost of travel in Belize

If you are a low-budget backpacker you should know that Belize is a good deal more expensive than other countries in Central America. Whereas you can get by on a backpacker budget of about $30 a day elsewhere, in Belize you should expect to need at least $50 a day. That’s not too bad if you are going on a holiday to Belize and have a set budget in mind, but it might figure into your calculations more strongly if you are travelling the wider region and have to allocate your time between countries. I myself stayed in Belize for a relatively brief time as I knew that I could do many activities (such as caving and visiting national parks or Mayan ruins) much cheaper elsewhere. As a result this page is not quite as in-depth as the ones for some of the other countries I have been. For me it was merely a matter of ‘most bang for your buck’, though even if you are on a budget I still highly recommend visiting Belize as it has a different flavour from anywhere else.

Most backpackers end up spending some time on the Caye islands and specifically on Caye Caulker, which has become Belize’ main backpacker hangout. Belize Travel: Getting to the Actun Tunichil Muknal (ATM) Cave