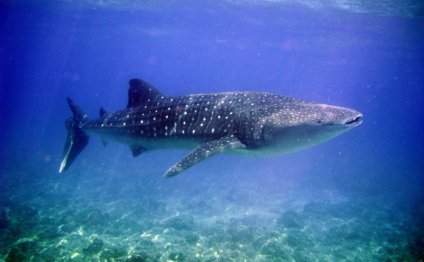 In the month of March, April, May and June, Whale Sharks are observed at the Gladden Split by divers and snorkelers. This species, despite its enormous size, does not pose any significant danger to humans. It is a frequently cited example when educating the public about the popular misconceptions of all sharks as ” man-eaters”. They are actually quite gentle and can be playful with divers. Divers and snorkelers can swim with this giant fish without any risk apart from unintentionally being hit by the shark’s large tail fin.

The area is used by over 20 species of Caribbean fish to release their eggs. Because of this unique event the Sharks are attracted to the area to feast on these eggs. Even if no Whale Shark are spotted, divers will have quality encounters with large schools of fish that are in the area to spawn. The whale shark tours to Gladden Split are lead by well trained whale shark guides to ensure your safety and the safety of the sharks. The best dates for sighting these majestic creatures are listed below. Come, and join us as we go in search for the biggest fish in the sea.

We have customized a 4 and 7 nights Belize Whale Shark Vacation Package for your convenience. The whale shark diving package includes:

Diving with whale sharks is a very popular tour in Belize during the months of March, April, May and June. Recommended for divers with 20 plus dives. If you have not been diving within a year we recommend doing a refresher course. Snorkel must be of experience level as well.

For more information about scuba diving with whale sharks in Belize, please contact us below:

General Information About the Whale Sharks

The whale shark, Rhincodon typus, is a slow-moving filter feeding shark and the largest extant fish species.The largest confirmed individual had a length of 41.50 ft and a weight of more than 47, 000 lbs and there are unconfirmed reports of considerably larger whale sharks.

Claims of individuals over 46 ft long and weighing at least 66, 000 lbs are not uncommon.The whale shark is the sole member of the genus Rhincodon and the family, Rhincodontidae (called Rhiniodon and Rhinodontidae before 1984), which belongs to the subclass Elasmobranchii in the class Chondrichthyes. The species originated about 60 million years ago.The whale shark is found in tropical and warm oceans and lives in the open sea with a lifespan of about 70 years.

Although whale sharks have very large mouths, as filter feeders they feed mainly, though not exclusively, on plankton, which are microscopic plants and animals. However, the BBC program Planet Earth filmed a whale shark feeding on a school of small fish. The same documentary showed footage of a whale shark timing its arrival to coincide with the mass spawning of fish shoals and feeding on the resultant clouds of eggs and sperm.The species was distinguished in April 1828 after the harpooning of a 15.1 ft specimen in Table Bay, South Africa.

Andrew Smith, a military doctor associated with British troops stationed in Cape Town, described it the following year. The name “whale shark” comes from the fish’s physiology, being as large as many whales and also a filter feeder like many whale species. In the months of March, April, May, and June, around the full moon, whale sharks are observed at the Gladden Split Area by…