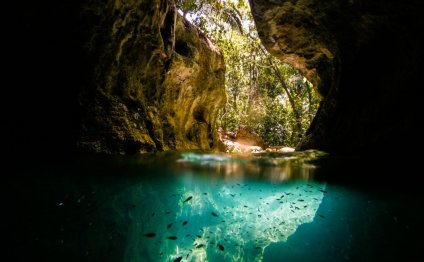 Caving in Belize is a way to experience the adventure and the culture of Belize at the same time. Caves were the entrance to the Mayan underworld; the portal between the tangible human world and the invisible world of gods and spirits. The Maya performed their most sacred rituals in caves. And it seemed that they preferred to not simply go into the mouth of the cave, they went deep inside the cave â sometimes miles and miles inside.Â Exploring inside the caves is a way to learn about a mysterious ancient Maya civilization and the geological processes that shaped the region.

You normally think caving is about small little passage ways, but more often than not the caves in Belize were caves with enormous chambers. This meant that we were able to traverse the Belize caves in various ways. In fact, during our time in Belize, we traversed 3 different caves, in 3 entirely different ways.

The ATM Cave is probably the most well known and in tact caving you can do in Belize. However it also requires you to be the most fit and adventurous. After hiking an hour through flowing rivers and to the stunning mouth of the cave, then you begin the real adventure. Strip down to your swimsuit and jump in the chilly water to wade, hike, and squeeze your way through narrow passageways. You do all of this in the water, sometimes water that is chest level. This is a cave where you go a mile+ into the caving system. Once you get to what you think is a dead end, then you actually get out of the water and start climbing to another level. Here youâll have your chance to get up close to ancient artifacts, used for rituals and sacrifices. Youâll also get to look directly at skeletons presumably sacrificed in Mayan rituals. And these arenât skeletons behind glass, they are right there â inches in front of you. Difficulty: High-You must be willing to crawl, climb, and swim.

Equipment: No special equipment is required, but you need to be wearing water shoes with hard bottoms as you will be walking over rocks and boulders.

â¢ Water shoes
â¢ Helmet with light (provided)
â¢ Insect repellent for the hike
â¢ Towel if needed.
â¢ No cameras are allowed â donât even bring them on the hike as I had a watch stolen from a pack left at the mouth of the cave.

Cost: $110 to $250 (package hotel stays) A registered guide is required to enter the cave.

What began as a sport by local kids using old motor vehicle inner tubes to float down the smaller rivers in Belize become a national past time and tourist attraction â Belize cave tubing. This is probably the most relaxed way to go through a Belize Cave, just sit and let the river current be your guide. However, because itâs so easy, that means there are many more people choosing this option. We hiked through the jungle carrying our tubes for a mile and came to a beautiful blue lagoon. For a short moment if felt as if you were on a deserted island and had found tropical paradise. However, the closer we got, the more we saw; big groups of adults and kids splashing around. Tubing is definitely more of a kid friendly option.

Youâll see a variety of different tubes used from basic to high end. However no matter what tube you had, every group was required to stick together and they did so by hooking up feet-to-arms in an elaborate tube train. We had rented old black tubes, the most basic you could get. I loved them as it reminded me of my childhood when we used to play in our neighborâs pool and the black tubes would get so hot in the sun you always had to make sure to dunk them in water before getting on them.

The cave we floated into was gigantic with large sinkholes part way through allowing little rays of light through the pitch dark caves. There were even waterfalls inside, but you could only hear them and not really see them. In fact, there are no real opportunities to get out of the tubes and walk around the cave, and there are no artifacts. This was more of a leisurely ride through the cave.

Different tubes to choose from Mike getting ready to launch us into the current.

Cost: 0 (includes entrance, tube, guide, and food)
Or combine this with a zipline adventure in the same area for 0

Allie held the spotlight and scared the bats while I took pictures and Mike paddled and steered the canoe; we made a good team. The Barton Creek Cave is a bit more remote and certainly the least visited out of these 3 caving systems. In fact, while we were inside, we only saw 2 other canoes. One of my favorite things in the cave was when youâd see a light streaming through a cave and meet another canoe; it was eerie.

You can drive to the mouth of the cave (through some lovely local villages) and from there rent a canoe to paddle your way through the cave. This was not a cave where you got out and walked around or swam, so itâs great for people who donât like to swim. You are able to fit 3 or 4 people in a canoe.

Mayan pottery pieces and bones can be observed by the hand held spotlight.Â The ceramics that have been found in Barton Creek Cave suggest that the Maya were using it from 200 A.D. to 900 A.D. The remains of at least 28 humans have been found within the Barton Creek Cave. Mike pointed out various artifacts as we rowed along. Yet I think at times Allie was more interested in trying to spot the bats instead of the pottery! The cave was adorned with stunning stalagmites and stalactites that were like the columns the size of the White House. It was also filled with natural bridges and chambers. We paddled in a mile until the canoe couldnât squeeze through any further, then you turn around and come back.

Difficulty: Easy to Medium due to the paddling required.