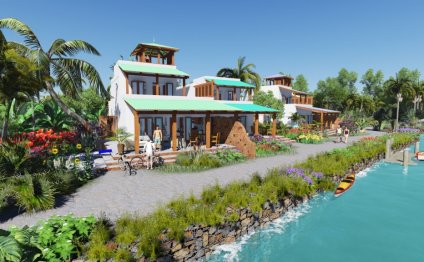 Where to buy property in Corozal District, Belize

Corozal District (a prime area) witnessed the rise and fall of the country’s sugar industry which once operated largely in the region. Economic depression replaced steady income as processing plants shut down. Labourers once again turned to survival fishing and cash cropping. The glory days of the mighty sugarcane are now told by a mural in Corozal’s Town Hall.

It is quite fortunate for the local communities that their home is situated by the sea. As the tourism industry progressed, visitors seeking undeveloped beaches started to arrive. The district gradually became a swimming, snorkelling, and fly-fishing spot. Some loved it so much that they decided to migrate. These include North American retirees who now comprise a small but fast-growing community. The region has been turned into a duty-free zone.

Despite the commercialization taking place in Corozal, it retains a charming rural appeal. Fire trees and pastel-painted traditional wooden houses give colour to road sides. Rivers and swamps are covered with lily pads. Farms abound in exotic fruits and root crops. Canoes are still used for fishing and transport. Authentic Mayan, Mexican, and Garifuna cuisines are served. People are known for their genuine hospitality, most of which are Spanish-speaking Mayans and mestizos. Some Mennonites also speak Spanish as their second language.

Corozal is still one of the least developed regions in the country. This means that budget accommodations abound and property values are lower than those in the more developed areas. Here, oceanfront lots and villas are the highly desired properties.

Hasty generalization of the seaside village of Consejo will reduce it to a community of poor fishermen and rich old people. While this observation is true to an extent, it tends to dismiss Consejo’s appeal. Locals fish its waters for survival. Some get income from taking visitors on fly-fishing trips that guarantee a good day’s catch of bonefish, pompano, and tarpon.

North American and British retirees prefer Consejo’s peace, low-cost living options, and convenience. There are no malls or an extensive choice of restaurants in the village. But its close proximity to the well-stocked shops and supermarkets, modern medical services, and recreational facilities in Chetumal, Mexico makes its private gated communities ideal and strategic. Water taxis serve as exciting and practical modes of transport between borders.

Consejo has experienced a reputation upgrade from being a smugglers’ hideaway to becoming a retirement site of international standard. It has three major estates: Consejo Shores, Mayan Seaside, and Wagner’s Landing. Consejo Shores is the pioneering development that is now highly occupied. There are still vacant lots and houses for sale. It has parks, a port, and golf courses. Homes all face the ocean and have direct access to the beach.

Corozal Town, the capital of Corozal District, can be reached by land and air. It has a church, parks, and a central plaza that mimic the Mexican town style. Statues, religious and otherwise, are everywhere. Commercial buildings are structured to withstand flash floods and the next hurricane. Some locals still remember the massive devastation that Hurricane Janet caused in 1955. Complete restoration was needed, including the redesign of road networks. While the houses still have thatched roofs, some now have concrete walls.

While Corozal Town has an interesting mixture of Mayan, colonial, and Mexican influences and preserves the Mayan ruins of Cerros and Santa Rita, it is not a tourist-orientated place. It functions better as a commercial centre. Yet aggressive developers try very hard to promote residential tourism. Recently, modern and colonial-style houses have been put up on the market.

The small village of Progresso was once occupied by the post-classic Mayans. Before driven inland by Spanish colonizers, they benefited from the lagoon for food and transport to and from other settlements. At present, the surrounding areas have been cleared and turned into real estate. Real Estate For Sale in Belize

Buying land in Belize is easy for everyone, locals and foreigners alike. Don’t be intimidated into thinking that prime beachfront…