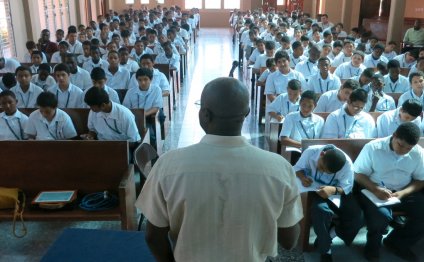 If you're a patriot - this past Holy Saturday wasn't exactly a day that made your heart swell with pride. First, at midday, a Guatemalan won the cross country, easily, while his brother was second - worst of all? The Belizean they beat, Joel Borland is a young Coast Guard officer. And then it only got worse by 5:00 pm, a BDF Staff Sergeant had been ambushed by Guatemalan bandits in the Chiquibul and shot multiple times. By nightfall, the flag inside your heart was definitely flying at half mast? But how were two Guatemalan brothers able to beat everyone else, and to do it so easily? Well, our Codie Norales was out on the road on Saturday and he saw just how it unfolded. Kwame Scott has this report:...

Sign in on Princess Margaret Drive at the BTL Park started from 4:30 am - we see National under 23 Champion Giovanni Lovell in his Belize jersey. At the line - past champions were called up to lead off the race which left from BTL Park in a rolling leadout at 10 minutes to 6:00.

The sound of car horns and sirens made the city know that the race was rolling - this year it featured 83 riders, 17 of them foreign comprising 8 Mexicans, 3 Guatemalans, 5 Americans and 1 Jamaican.

They would attempt to ride all the way from Belize City to Cayo and back, and less than 5:40:12 - which is the current record set in 2008 by American Ryan Bauman.

And rounding the Flag Monument roundabout - the 82 riders were cruising

At Leslie's imports you could hear the sound of the starting gun, and the riders bolted the first station prize at Cavetubing.com is easily taken by Mexican Luis Balam. With the southeast breeze in their backs, the early attacks were relentless. Around mile 4 one of the Padilla brothers attacked but he's followed very closely by Tarique Flowers of Team Benny's and a few other riders.

Around Old Belize, three riders successfully separated themselves from the main pelothon for the first decisive breakaway of the day.

Around mile seven, we see the sights and sounds of the main peloton of riders - the Belizean flag was hoisted high at mile 9; as the three leaders attempt to extend their lead by keeping a brisk pace and taking turns at the front.

At Hattieville, Richard Santiago claims the station Prize and some 40 seconds later, the main peloton led by Jessmar Guerra of Benny's.

Around mile 17, you can see Justin Williams putting his everything into this run - could it be a repeat of last year's historic ride?

At Rockville, Alejandro Padilla takes the station prize and the breakaway rolls on the chase group at this time is being led by Quinton Hamilton.

Around mile 28, Justin Williams refuels and hydrates. At La Democracia the gap is 58 seconds, and Padilla takes yet another station Prize.

Erwin Middleton, Kent Bob Gabourel and Team Cancun Mexican Godinez are tying to break away from the chase group.

Around mile 32, Padilla is taking refreshments from his service vehicle. Around mile 35, Herman Requena of SMART takes a pull and then moves over for Chris Harkey but then the attacks came and the breakaway has been caught