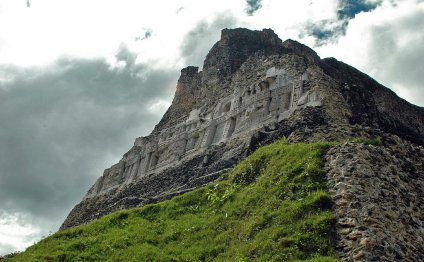 Belize is the only English-speaking country in Central America and the only one without a Pacific coastline. Many coral reefs, cays, and islands to the east—such as Ambergris Caye, Lighthouse Reef, Glover's Reef, and the Turneffe Islands—are part of Belize's territory, forming the Belize Barrier Reef, the longest in the western hemisphere stemming approximately 322 km (200 mi) and the second longest in the world after the Great Barrier Reef. Belize's largest river is the eponymous Belize River.

Belize claims an exclusive economic zone of 200 nautical miles (370.4 km; 230.2 mi) and a territorial sea of 12 nautical miles (22.2 km; 13.8 mi). From the mouth of the Sarstoon River to Ranguana Cay, Belize's territorial sea is 3 nmi (5.6 km; 3.5 mi); according to Belize's Maritime Areas Act, 1992, the purpose of this limitation is to provide a framework for the negotiation of a definitive agreement on territorial differences with Guatemala.

Belize's lowest elevation is at sea level. Its highest point is Doyle's Delight at 1, 124 m (3, 688 ft). This conclusion was the result of a recent survey, showing Doyle's Delight is slightly higher than Victoria Peak at 1, 120 m (3, 675 ft), which had long been regarded as Belize's highest point.

Natural hazards in Belize include hurricanes (mostly in the late Atlantic hurricane season, September to December) and coastal flooding, especially in the south.

Belize has a tropical climate with pronounced wet and dry seasons, although there are significant variations in weather patterns by region. Temperatures vary according to elevation, proximity to the coast, and the moderating effects of the northeast trade winds off the Caribbean. Average temperatures in the coastal regions range from 24 °C (75 °F) in January to 27 °C (81 °F) in July. Temperatures are slightly higher inland, except for the southern highland plateaus, such as the Mountain Pine Ridge, where it is noticeably cooler year round. Overall, the seasons are marked more by differences in humidity and rainfall than in temperature.

Average rainfall varies considerably, ranging from 1, 350 millimeters (53.1 in) in the north and west to over 4, 500 millimeters (177.2 in) in the extreme south. Seasonal differences in rainfall are greatest in the northern and central regions of the country where, between January and April or May, fewer than 100 millimeters (3.9 in) of rain fall per month. The dry season is shorter in the south, normally only lasting from February to April. A shorter, less rainy period, known locally as the "little dry, " usually occurs in late July or August, after the initial onset of the rainy season.

Hurricanes have played a devastating role in Belizean history. In 1931 an unnamed hurricane destroyed over two-thirds of the buildings in Belize City and killed more than 1, 000 people. In 1955 Hurricane Janet leveled the northern town of Corozal. Six years later, Hurricane Hattie struck the central coastal area of the country, with winds in excess of 300 kilometers per hour (186 mph) and 4-meter (13.1 ft) storm tides. The devastation of Belize City for the second time in thirty years prompted the relocation of the capital some 80 kilometers (50 mi) inland to the planned city of Belmopan. A hurricane that devastated Belize was Hurricane Greta, which caused more than US$25 million in damages along the southern coast in 1978.

There was a period of 20 years that Belize was considered as a hurricane-free zone by many until Hurricane Mitch (October 1998) caused quite a stir and gave rise to hurricane awareness and the National Emergency Management Organization (NEMO). Two years later Tropical Storm Chantal and Hurricane Keith did much to put the country on the hurricane map.

The Phoenix Resort in Belize - Views of our Suites