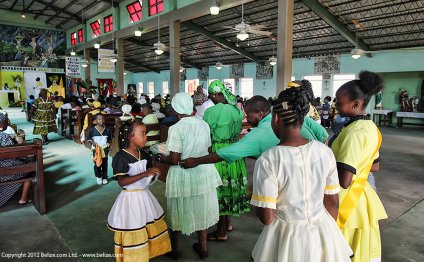 Though commonly referred to as "Garifuna", the people are properly called "Garinagu" and the culture and language are "Garifuna". The Garinagu are recent arrivals to Belize, settling the southern coast of Belize in the early 19th century. The epic story of the Garinagu begins in the early 1600's on the Caribbean island of St. Vincent.

In 1635, two Spanish ships carrying Nigerian slaves floundered and sank off the coast of St. Vincent. The slaves that survived and swam ashore found shelter in the existing Carib Indian settlements. Over the next century and a half, the two peoples intermixed, intermarried and eventually fused into a single culture, the Black Caribs or Garinagu.

By 1773, the Black Carib was the dominant population of St. Vincent. But, European politics began to exert its influence throughout the Caribbean. A series of wars between the French and British on St. Vincent culminated in a final battle on June 10th, 1796, where the French and their Carib allies where forced to surrender and leave the island. Thus would start a journey by the exiled Caribs in search of a home.

The British deposited the Caribs on the island of Roatan, Honduras. Shortly after, the entire marooned population migrated to the mainland of Honduras and allied with the Spanish in the fortress town of Trujillo. Unfortunately, a brief civil war in 1832 found the Caribs on the wrong side and once again many were forced to flee to neighboring British Honduras. According to tradition, the first Garifuna arrived in then British Honduras on November 19th, 1802. This day is now a national holiday in Belize celebrated with drums, dancing and pageantry. Today, there is one town in Toledo - Punta Gorda - that is considered a Garifuna town, and two Garifuna villages - Barranco (the oldest Garifuna settlement in Belize) and tiny Punta Negra.

Today, the Garinagu struggle to keep their culture alive. It is the devotion of the Garinagu to their roots which sets them apart from the other ethnic groups in Belize. While many Garinagu are professed Catholics, they have retained numerous traditions and rituals from their Afro-Caribbean heritage.

Central to the Garifuna community is the belief in and respect for the ancestors. The Garinagu retain their powerful spiritual connection with past generations of any family group through a ritual called "Dugu". A Spiritual leader called a "Buyei" or shaman presides over family members, who travel from all over the world to gather at the dugu meeting place called a "temple". No expense is spared as fresh seafood, pork, fowl and cassava bread are prepared for days of healing, dancing, drumming and communing with the spiritual world.

This spiritualism spawns a wealth of creativity among Garinagu in the form of music, dance and art. Punta Rock is a modern musical interpretation of a Garinagu cultural dance. The Punta dance accompanying the music - with its seductive movements and rhythmic beat - is Belize's most popular dance.

Another favorite dance - the "John Canoe" - is performed during the Christmas season. The dancer wears a mask which resembles an English face topped by a hand-made hat similar to the English naval hats of the 18th century. The dance displayed the skills of warrior-slaves while mocking their British overseers.

Cassava, or manioc, is a woody shrub or herb which, like potatoes, has tuberous roots. But unlike potatoes, the juice which lies between the fibers of the manioc root is poisonous. The secret of extracting the root, involves a two-day process. First, the root is dug out before daybreak. The skin is peeled off, and the root is grated into a mash on stone studded boards.

This mash is placed into a wala, a long, narrow, loosely woven tube made of palm fronds. When stretched, the wala compresses the mash, squeezing out the poisonous fluid. The resulting dehydrated cassava mash is then sun dried and made into flour, which can be sifted and baked into flat round loaves. The course "trash" left from the sifting is baked black and simmered with ginger, sugar, and sweet potatoes into a favorite drink called Hiu.

Garifuna Culture of Belize on Display at Black and White ...

The Garifuna Collective of Belize/Guatemala