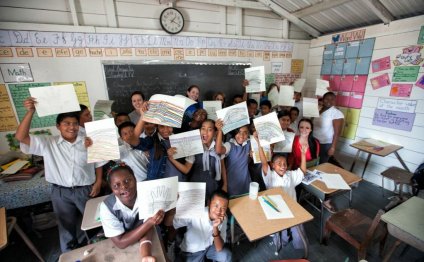 The education system in Belize is has its roots in the English system but has been greatly influenced by the U.S. education system primarily through the influence of the Jesuits – it is no wonder that the best schools in Belize are Catholic. Students move through forms, from first form in primary school to sixth form (junior college), although some schools, following U.S. and Caribbean Community practices, use the grade system grades 1-12.

The Catholic Church, and to a lesser extent the Methodists and Anglicans, through agreements with the government, operate many of Belize’s public schools under Church-State partnership that has its roots in Belize’s history as a British colony. Nearly two-thirds of Belize’s population are teenagers or younger, so in every part of Belize you’ll see school kids in their uniforms that vary from khaki, to blue to red pinstripes, and yellow depending on the school. In Belize City and elsewhere, there are both church and government-run primary and high schools.

A few private or parochial schools run by Protestant and Evangelical denominations also exist. The best schools are in Belize City and in larger towns, and many of the more needy schools, with untrained teachers and few books or equipment are in the far south. One study found that lack of supplies was a major problem for schools in Toledo, and that about one-half of the teachers in the district had no educational training beyond high school. Only one in two Toledo children even finish primary school.

In 2010, more than 90, 000 students were enrolled in Belize schools and colleges at all levels, including almost 4, 000 in preschools, 63, 000 in primary schools, and more than 15, 000 in high schools. Close to 6, 000 students were in post-secondary studies.
Primary education is free and compulsory through age 14. However, a sizable minority of Belizean children does not complete primary school. Only about 70% of teachers are professionally trained, but that number is growing with recent amendments to the Education Act 2010 that aims at 100% of all teachers being professionally trained as a requirement to obtain a teacher’s license.

As of 2010, corporal punishment was prohibited in the Education Act:

“51. (4) In accordance with subsection (2) of this section, nothing in the statement of general principles and measures or measures for regulating the conduct of students shall authorise anything to be done in relation to a student which constitutes harassment, intimidation, the administering of corporal punishment or any other actions harmful to a student.”

Even teachers with four-year college degrees earn only about US$1, 000 a month. Secondary education, consisting of a four-year high school, is competitive, requiring passage of a comprehensive exam. The student’s percentile ranking on the admissions test in part determines which school the student can attend. Charges for books and fees at secondary schools are beyond the reach of many Belizean families.

About three-fourths of primary school students do go on to secondary schools, though not all graduate. The typical tuition cost for private schools in Belize is around US$20 per month. The Belize government pays this tuition if the student is from a very needy family but this program has become severely politicized and impractical for most poor students except those very resourceful or connected with the local political apparatus . Private schools are available in a few areas.

The Island Academy on Ambergris Caye, as an example, which goes through grade 8, charges US$3, 000 a year per student. This school has a good reputation. Belize Elementary School, and the new Belize High School in Belize City are among the best private elementary schools on the mainland. Saint Catherine Academy for girls and St. John’s High School for boys, both in Belize City, are recognized as among the best high schools and are popular with expat families living in Belize.

Our Belize Education System is failing and how can it be ...