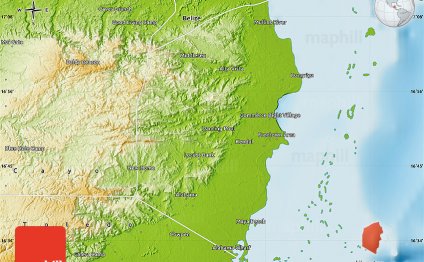 Belize is divided into six districts, all distinctly Belizean, but each one having its own unique blend of cultures and natural environment.

The Belize District contains both bustling Belize City and tranquil Ambergris Caye, while Cayo has no seacoast but a lively river system and rich rainforests dotted with Maya archaeological sites. To the north Corozal and Orange Walk both have sweeping sugar cane fields and a more Spanish ambience, while Stann Creek and Toledo Districts to the south have larger Maya and Garifuna populations and dense jungles.

However all districts share that unique Belizean multiculturalism, with Creole, Mestizo, East Indian, Middle Eastern, Chinese, European and other ethnic backgrounds all part of the cultural mix that makes Belize the vibrant, colourful country it is. Belize’s six districts, their capital cities, area and populations are:

Hotel Seven Seas Resort - Get Away To Belize Belize Districts and Major Marine Features Belize has 6 districts, which are more or less the same thing as a county. They…