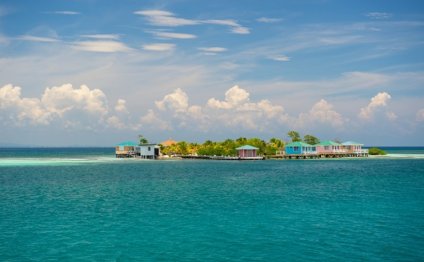 So, I reckon that means Belize had better be bracing itself for even more tourism growth in the future?

In another story on NCL, Travel Pulse says “the cruise line’s website claims visitors will find both ‘solace and adventure’ in Harvest Caye” when it opens in February. We’ll have to take travel Pulse’s work for it because the Norwegian Cruise Line website link produces a page that ominously says “Action not found.” Although we’re pretty sure their cruise passengers will find plenty to do on the caye without ever actually stepping on to mainland Belize — to the relief of little Placencia, which at one point was the designated drop off point for thousands of passengers.

Here’s to solace and adventure on Harvest Caye in 2016.

Indeed, even though NCL has picked up its ball from Belize City and taken it south, there are others in line to play nice with the awkwardness that is Belize City as a cruise destination. (The remote anchorage and dependence on motor launches to transport passengers to dry land has sent a few ships packing in stormy weather in the last year, costing hundreds of thousands of dollars in lost tourist spending.)

Caribbean Journal reports that Jamacia-based MSC Cruises has just made its first-ever stop in Belize City. MSC Cruises is a division of the Mediterranean Shipping Company.

The delightfully named Fantasia-class cruise ship Divina ported in Belize after departing its home port in Falmouth, Jamaica, and stops in Georgetown, Grand Cayman and Cozumel, Mexico. It is testing the waters, so to speak, on what Belize has to offer its passengers.

MSC has four 139, 400-ton ships in its Fantasia Class. They are so big, they can’t squeeze through the Panama Canal until the widening is completed later this year. The Divinia boasts 1, 751 staterooms, holding 4, 363 passengers. The crew adds another 1, 300 personnel aboard. Eighty percent of the staterooms have ocean views.

You can bet that the Belize Tourism Board and Belize Cruise Port are going all out to show them what a good time they can have in this beautiful and diverse little country.

“We welcome the new European cruise line, MSC Cruises, in their inaugural call to Belize, ” says Director of Destination Planning and Cruise, Valdemar Andrade. “We are happy to have them as a new cruise line partner for our destination …” Andrade hints that yet another cruise line is investigating Belize City as a port of call.

With well above 300 cruise ships stopping in 2015, and more on the way, the port indeed expects to remain robust.

“Despite a slowdown in 2015, Belize’s land-based tourism has also surged in recent years. Last year Belize recorded 321, 217 land-based, overnight visitors, a 9.2 percent increase over 2013. While the 101, 747 tourist arrivals hosted between January and March represents a slight 1.1 percent increase over 2014, the country is still considered on track to continue as a fast-growing Caribbean travel destination.”

Without even considering the explosive “Southwest Effect, ” which has seen a jump in vacationers with the entry of low-cost Southwest Airlines into the Belize airspace, Travel Pulse is wondering how “the transition to mass tourism will impact the once-sleepy exotic destination.”

Seriously? Mass tourism? Is that where we are headed?

I’ll believe it when I see the mega hotels and resorts break ground in far northern Ambergris Caye . . .