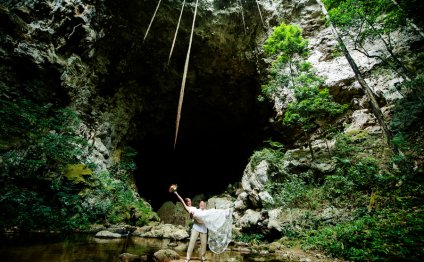 The name Caracol is Spanish for "snail shell" and was given because of the inordinate numbers of snail shells found there.
Caracol remains one of the more difficult ruins in Belize to access, however a significant portion of the road leading to Caracol has been paved and getting there gives visitors the chance to travel on one of the more scenic roads in Belize.

At the peak of its existence, the Mayan city of Caracol covered some sixty-five square miles and was home to more than 100, 000 people. It is a Classic period urban centre, comprising a central ceremonial area converged on by causeways leading to the outlying structures. The site's special features include the buildings surrounding the A court, which functioned during the Early Classic period as an astronomical observatory. Following a now familiar pattern, many of the site's pyramids were constructed in the Early Classic period, and later covered over by ever more impressive structures.

Since it's rediscovery in the 1920s, archaeologists have found the earliest dated carved stelae in Belize, dating back to 400 A.D., and unearthed the massive structure called Canaa or "Sky Place", believed to have been completed around 800 A.D. This pyramid is the tallest and largest man made structure in Belize.

Light-weight, comfortable clothing and shoes with a good grip. Long trousers are more suitable than shorts as they give more protection from insects and weather. Hat, sunscreen, insect repellent and drinking water are advisable. As the Belize port is tendered, I’m very happy I had purchased Faster To The Fun. I reserved with outside of Carnival with… Altun Ha (Northern Belize): One of the most easily accessible Mayan ruins from Belize City, Altun Ha is a small yet well-preserved…