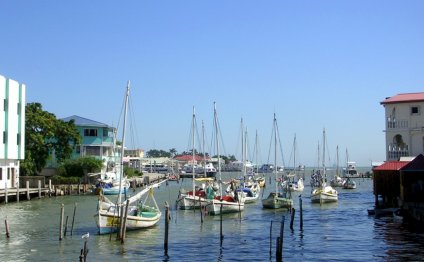 Where to Stay in Belize City?

Editor’s Note: If you have questions about traveling to Belize, leave a comment below and Scott will do his best to answer your travel questions.

It’s Better in Belize. You Better Belize It. It’s Unbelizeable.

If I had a nickel for each time I saw a Belize-inspired T-shirt, I’d have at least 60 cents by now. Maybe a buck.

The problem is not a lack of T-shirts. Trust me, there are heaps on sale in Belize. The problem is that Belize is one of those places that refuses to become mainstream. Every few years something thrusts Belize into the global spotlight.

Yet beyond the occasional news item, most travelers know little if anything about Belize. Don’t belize me? OK smarty pants, let’s test your knowledge with my patented Belize Pop Quiz.

OK, let’s see how you scored. The answer to question #1 is true. Belize has its very own Guinness brewery, under license from the mothership back at St James’s Gate, Dublin. This is also where Belize’s homegrown beer, Belikin, is bottled.

Question 2? True. The British Army maintains troops in Belize, a remnant of the days when Belize was a UK possession known as “British Honduras” (Belize gained full independence in 1981).

Question 3? You can be forgiven for missing this, it was a trick question. The answer is false because it’s not George Lucas but Francis Ford Coppola who stumbled across a dilapidated jungle retreat in 1981 and, 12 years later, opened the utterly lovely Blancaneaux resort (more on that below).

Question 4? False. Only Mexico and Guatemala share a border with Belize, not Honduras.

And question 5? True. ‘Thank you for choosing love’ is the unofficial motto of Love FM. My favorite DJ used to sign off with “…here are super-fantastic kisses to you and you and you” (it sounds best in a Belizean accent).

Sundance Film Festival 2014: Where to Stay in Park City!

Where To Stay In Belize Bedroom 3 is on the 1st floor and features a full size bed, and a kitchenette with a range, microwave and coffee maker. All… Places to Stay in Placencia Belize