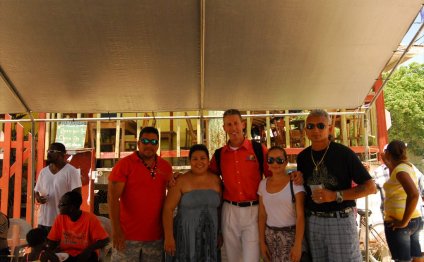 The Belize Hotel Association (BHA) hosted their bi-annual meeting at Exotic Caye Beach Resort on Ambergris Caye on Wednesday December 4th. At the meeting, the directors of the BHA tabled their reports to their membership about activities in the industry over the past six months. Several subjects were discussed, including issues affecting the tourism industry in Belize, and the advancements being made to strengthen the local industry.
Speaking at the event, BHA President Douglas Thompson said that crime continues to be a serious issue affecting the industry, especially in areas such as Belize City and Ambergris Caye. While Thompson explained that the negative impact has to do with the way in which the media reports about crime situation in Belize, he reiterated that the Police Department is also not doing enough to address the issue. “We could do a better job in reporting about crime. We cannot stop crime completely but we are hoping that government steps up a little bit more than they are doing now. We believe our police need better training.”
Thompson also indicated that the main goal of the organization is to get ‘heads on beds’ and those heads [guests] need to feel safe while in the country. On Ambergris Caye, the crime situation is also a problem and according to Thompson, tourists have been complaining, with much of the issues pointing to the police officers. “The problem we are having in San Pedro is the Police Officers firing their weapons as a way of controlling, I don’t know what. To fire into the air is as bad as firing at somebody for our visitors. When you are [in Belize] as tourists you don’t want to be hearing gunshots… We have direct complaints from our tourists that stay in resorts [in the San Telmo area] where they see police firing their weapons. It has been an ongoing problem and it is our guests that are complaining, ” said Thompson.
And even as crime is affecting tourism, all is not bad in the industry since Belize is beginning to see double-digit growth in tourism. “We have made a conscious effort, with the help of the Belize Tourism Board, to take our message around the world. Wherever there are potential travelers, we are there to present the message of Belize. We are all over the world and we are beginning to see the results. We started the process over five years ago and our growth has been ongoing. Even during the down turn in 2008- it was not as bad compared to the Caribbean and the rest of Central America. Tourism in Belize is growing somewhere between 9% to 11% annually while the rest of the Caribbean is growing at about 2% for the same period.”
According to Thompson, the tourism stakeholders have even managed to convince the various international airlines to increase seat availability to Belize to over 10 thousand per month. “Starting in December of this year, for the first time, we will have over 10 thousand available seats on board several airlines that are coming to Belize. We can go to these airlines, but it’s up to them to increase their seat availability based on their research. This means a lot for our tourism industry and for Belize because if the airlines are selling more seats to Belize, then that means that the hotels get to benefit as well.”
The BHA represents 90 members from about 700 registered hotels and resorts. However, the 90 BHA members represent about 68% of the total beds/accommodation in Belize. Belize Hotels on the Beach