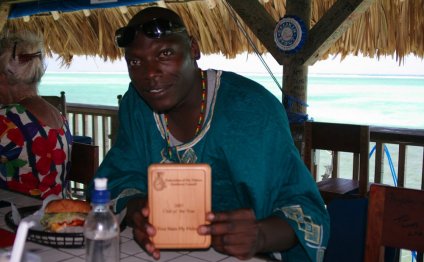 Philip Stanley Wilberforce Goldson (25 July 1923 – 3 October 2001) was a Belizean newspaper editor, activist and politician. He served in the House of Representatives of Belize as member for the Albert constituency from 1965 to 1998 and twice as a minister. Goldson was a founding member of both of Belize's current major political parties, the People's United Party (PUP) in the 1950s and the United Democratic Party (UDP) in the 1970s. He was also the leading spokesman of the hardline anti-Guatemalan territorial claims National Alliance for Belizean Rights party in the 1990s.

Goldson was born in Belize City to Peter Edward Goldson and Florence Babb and attended St. Mary's Primary School. Although he never had an opportunity to go to a secondary school he studied at night and succeeded in obtaining the Cambridge University Overseas Junior Certificate in 1939 and the Senior School Certificate in 1941. For much of the early 1940s he participated in the Open Forum movement featuring George Price and Leigh Richardson as well as older activists such as Clifford Betson and Antonio Soberanis. But his main job was as editor of the Belize Billboard, which he took up in 1941.

Participation in the nationalist movement[edit]

From 1941 to 1947, Goldson worked in the British Honduras Civil Service, at the same time started his journalism career doing editing work at the Civil Service Chronicle. With the advent of the nationalist movement, he wrote news items for the Belize Billboard. The plight of the workers in Belize led him into trade unionism. He became the national organizer of The General Workers Union in 1949, later becoming its general secretary.

In 1950, Belize's first major political party, the PUP, was formed under John Smith as leader. Goldson was named assistant secretary, working under Price. He continued to edit the Belize Billboard and kept it running as a daily newspaper until its offices were destroyed in the late 1960s.

In 1951 both Goldson and Richardson were convicted of "seditious intention" based on an extract from the Belize Billboard, which stated, "There are two roads to self government (Independence). Evolution and Revolution. We are now trying evolution." The colonial government held that the words imputed intention to try revolution if evolution did not succeed. Both Goldson and Richardson were sentenced to one year of hard labour. While in prison he taught his fellow inmates to read and write. Prior to going to jail for his ideals Goldson won a seat to the Belize City Council and had served as Vice-President (Deputy Mayor) until his conviction.

In 1954 Goldson won a seat in the newly-created British Honduras Legislative Assembly, where he was appointed member (quasi-Minister) for Social Services. His portfolio included Labour, Housing and Planning, Health, Education and Social Welfare and Community Development. During this period he coordinated the building of Corozal Town after its destruction in 1955 by Hurricane Janet. Based on other people s reviews, I booked Coral Breeze. It was excellent. We snorkeled, which was beautiful despite most…