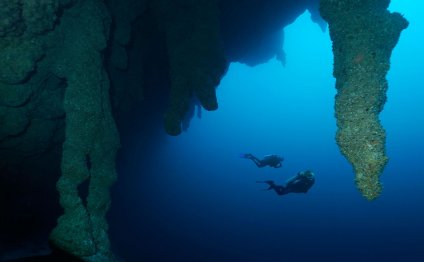 The Great Blue Hole of Belize, hearing those words will bring a rush of images to a scuba diver's mind. The Blue Hole dive is the most famous dive in Belize and is known as one of the best dives in the world and is probably the most recognized dive site by non-divers.

Let's be clear about one thing, diving the blue hole in Belize is “awesome" and if you have the chance to dive it you should. Like anything worthwhile doing in life, a little inside information is always nice. In this article, we will share what we learned about the different options on how to get there and how to dive this fabulous die site.

What Is a Blue Hole?

This seems a simple question. However, there are scientists who specialty is trying to answer it. We will restrict the answer a little and keep the focus on the Great Blue Hole of Belize.

There are two steps to the creation of a Sink Hole or a Blue Hole.

First there needs to be a hollow subsurface space followed by the collapse of the spaces roof. The space such as a cave or cavern is created by the effects of erosion or by Carbonate dissolution, which is a chemical process. Strata, such as limestone and sandstone which are porous, are easily reduced by both of these methods leaving a void behind. The second step is where the roof of the cave or cavern can no longer support its weight. In nature, this happens when the erosion or carbonate dissolution process has weakened the roofs structure. Earthquakes have been known to accelerate the weakening of a roof. If the top of this sink hole is below sea level and at sea, it will become a Blue Hole.

From an aerial view, a Blue Hole looks like a large dark blue circle in the middle of the sea, making it a truly spectacular phenomenon. The deep blue coloring is the result of reflections and color absorption of water. It is sharply contrasted by the paler teal, green, and blue shades of the surrounding waters which are much shallower.

Other famous blue holes around the globe include those off the coasts of the:

What Made the Great Blue Hole in Belize?

In the blue hole today, at a depth of around 35 meters, there are some stalactites. Stalactites are the result of mineral rich water seeping into a cave. Therefore, during the times of growth, we know the cave was dry and above sea level. Samples taken from these stalactites have been key to establishing a timeline for the age of the cave.

One strange outcome of the study showed that sometime between the last two ice ages, there was an earthquake that tilted the cave by 12 degrees. Research also suggest that at the time the roof collapsed creating the blue hole, the cave was underwater.

Cross section of The Blue Hole in Belize

What Can Survive inside the Blue Hole?

The shallow waters surrounding the Blue Hole, are rich in marine life with dense coral growth. The inside of the Blue hole stand in a drastic contrast. The sheer walls limits the amount of sunlight entering, creating a dim environment except when the sun is directly overhead. Poor water circulation restricts the amount of nutrients available.

Today, the Great Blue Hole in Belize is about 300 meters in diameter and 124 meters deep. Like other blue holes, it is circular and breathtaking in appearance, Jacques Cousteau introduced the site to the public in 1971 on his television series and dubbed it one of the top 10 diving sites on the planet.

Jacques Cousteau was the first of many scientists who studied the hole looking for answers to many different questions. Recently, researchers using core samples taken from the sediment of the hole's floor have created a scientific model that correlates climate change with the fall of the Mayan empire.

who science division where london map which project management software is best who's a scientist how far london to usa how much science diet to feed dog where is leeds manager from who workers salary what teaching positions are in high demand why design is important who manufactured my windows how much solution for bissell little green where is product key what solutions can be used in a nebulizer why manufacturing business how much design house in startup who ends up with who where from samsung company where to products online who management of pph how many design patterns are there in microservices from where to start teaching english grammar how many development region in nepal how many startups are there in india what science is taught in 12th grade when project runway season 20 what manager has the most trophies when startup valuation how equipment works ultrasound where science and spirituality meet where technology came from what manufacturer makes kia which science degree is easiest what device is espressif where to cool solution re2 where from your's teacher why science diet is bad how teaching styles affect learning what london airport is closest to the city where to find solutions how science and technology affects society how many project pollo locations are there how much managers check bdo how much solution for bissell little green how much design business card
Source: www.bookyourdive.com Are you ready to dive the Blue Hole in Dahab? Diving, as a sport, can be as extreme as you want it to be. Scuba diving is…