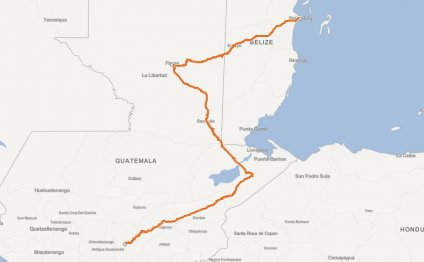 Travel from Guatemala to Belize takes you through some memorable scenery (Photo: Hemera Images )

Guatemala in Central America borders the southwest of Belize. Both destinations offer ancient Mayan ruins, national parks, markets, villages, and, in the case of Belize, snorkeling and diving in the Caribbean Sea. Visitors travel between the two countries by land, sea and air. Have patience and a sense of humor for travel from Guatemala to Belize - the transport is sometimes unreliable but always an adventure in itself.

One land border sits between Guatemala and Belize, at Melchor de Mencos in Peten, Guatemala. On the Guatemalan side, the border is 44 miles from the junction that connects with roads heading southwest to Flores 18 miles away. The border is five miles from the first town in Belize, Benque Viejo del Carmen. No visas are required for a tourist visit of up to 30 days. All U.S. citizens must possess a U.S. passport valid for at least six months from the day you arrive in Belize, and proof of return to the U.S. Cross the border in daylight hours as the area can be dangerous at night and buses stop running. There is no departure tax when leaving Guatemala by land.

According to the Lonely Planet, bus is the most common way to enter Belize from Guatemala. Travel from Guatemala to the border by bus or minibus and cross the border on foot to pick up a Belize bus on the other side, or travel through the border on Guatemalan transport to San Ignacio or Belize City. You need to disembark and cross through immigration on foot, carrying your own luggage. Línea Dorada runs two direct daily buses from Flores to Belize City, a trip that takes a minimum of five hours. Línea Dorada and San Juan Travel also run to and from Chetumal in Belize to Flores, Guatemala (eight or nine hours).

Alternatively, take a boat from Puerto Barrios or Livingston, Guatemala, to Punta Gorda in the Toledo district at the southernmost point of Belize. Small boats travel daily on the one-hour journey across the Gulf of Honduras. Exotic Travel in Livingston operates a boat to Punta Gorda every Tuesday and Friday and a variety of operators run daily boats from Puerto Barrios - check at the dock. Leaving Guatemala by sea incurs a departure tax.

To bring a car into Belize you need a one-month import permit and you must leave Belize with the vehicle when the permit expires. Guatemala car rental agencies are unlikely to allow you to take a car over the border but you can hire a car once you are in Belize. According to the U.S. State Department, road conditions in Guatemala and Belize are significantly different from those in the U.S. The few paved roads in both countries lack markings. Unpaved roads flood in heavy rain. Poor road conditions and speeding contribute to many accidents. The U.S. State Department advises against driving at night.