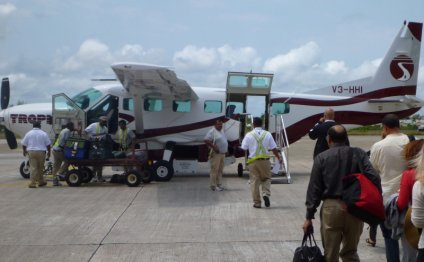 All ships anchor in Belize City harbor and passengers are whizzed from ship to shore via speedy Belizean tenders; takes around 20 minutes to tender ashore. All passengers disembark at docks in Belize’s Tourism Village.

The Tourism Village is the city’s main shopping area with a variety of stores, shops and restaurants. The city’s downtown area and the Marine Terminal are about five minutes away on foot, and there’s always a line of taxis waiting adjacent to the Tourism Village.

Belize City is made up of many wooden buildings and exudes some colonial charm, but the downtown area also has many seedy neighborhoods, and tourists should beware of walking around the city after dark. For cruise passengers, Belize City is primarily a jumping off point for tours and excursions to its many natural and historical attractions.

Taxis are readily available at the Tourism Village as well as in the city and at hotels. Taxis do not have meters and although most drivers charge a standard fare, make sure you determine the fare before getting in so as to avoid being burned upon arriving at your destination. There are also water taxis and ferries that depart from the Marine Terminal to the outlying cayes, including the larger resort cayes such as Caye Caulker and Ambergris Caye. A trip from Belize City to San Pedro, the largest town on Ambergris Caye, takes around 80 minutes and costs $45 roundtrip.

Do It Yourself Driving: It’s also possible to rent a car although this is not recommended due to the poor condition of many roads. Rental agencies in Belize City include Safari/Hertz(011-501- 2-235395) and AvisBelize(800-331-1084) have downtown and airport locations and there are other agencies with offices at the Tourism Village.

Flights: Tropic Air; 800-422-3435 ( and Maya Island Air; 800-225-6732 ( both offer a regular schedule of flights from Belize City to Ambergris Caye and Caye Caulker. Flights to San Pedro on Ambergris Caye leave approximately every 90 minutes until 5 p.m. and take just 20 minutes; cost is $94 roundtrip. These are indeed "very small" planes with some carrying a maximum of five passengers and the pilot.

Best nature lover/history buff combo: An ideal tour for those who want to view creatures in the wild and also explore Mayan ruins. Travel first up Belize’s Wallace River (also known as the Olde Belize River), inhabited by a host of creatures including manatees, crocodiles, iguanas and many species of tropical birds. The second half of the tour is spent at Altun Ha, one of the most important Mayan sites in the country. Duration: 6 hours; Price: $65

Best for snorkelers: Travel in a snorkel boat to Goff’s Caye, a tiny caye 12 miles offshore where there is abundant reef life and magnificent coral formations. Here it’s possible to snorkel either from the beautiful beach or directly off the snorkel boat. Duration: 4 hours; Price: $55

Best "interactive" shark excursion: Once-in-a-lifetime opportunity to get up close and personal with some of Belize’s most "people-friendly" underwater creatures. Speedboats transport passengers directly from the ship to area of coral reef known as "shark ray alley" where they can snorkel amidst nurse sharks and stingrays; excursion also includes lunch s in San Pedro on Ambergris Caye. Duration: 7 hours; Price: $70

Diving and Snorkeling: Number one on the hit parade of favorite outdoor activities due to the astounding sites along the barrier reef. Some of the best dive sites lie just off Ambergris Caye (see Getting There above). Charter operators listed on the Belize Tourism’s Web site also offer day trips that include transportation. However you get to Ambergris Caye, head for the main town of San Pedro, where many of the dive operators are clustered. A favorite snorkeling area is known as "Shark Ray Alley" (one hour by speedboat from San Pedro) where it’s possible to get "up close and personal" (petting is permitted) with nurse sharks and sting rays. Hol Chan Marine Reserve is a five square mile underground water park. Your first impression of Ambergris Caye is likely to be from the air, because most visitors to the island fly into the Philip…