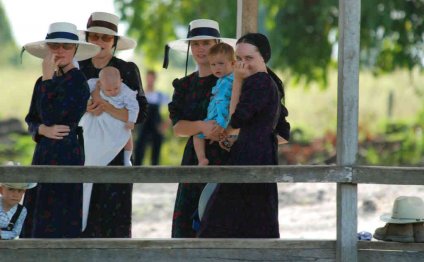 Perhaps the least understood, although most conspicuous, population of Belize, the Mennonites hold fast to their culture and strict beliefs while continuing to assist the commerce, carpentry, engineering, and agriculture industries of Belize. The Mennonites emerged during the Radical Reformation of the 16th century in Northern Europe. Persecuted throughout the ages for their beliefs, particularly their refusal to pay land taxes or support the military, this Anabaptist group migrated from Holland to Germany and finally to Prussia. Their unique dialect, an archaic amalgamation of Dutch and German, has persisted the 400 years since this move and is still spoken in the Mennonite communities of Belize.

The migrations continued throughout the 17th and 18th century and eventually led to North America, namely Pennsylvania and Manitoba, where they continue to uphold their peaceful agricultural lifestyle. About 3, 000 Mennonites finally relocated to Belize in 1959 along the River Hondo in search of a life free of religious persecution and the pressures of modern society. They signed a special agreement with the Belize Government which exempt them from military service and certain forms of taxation while concomitantly guaranteeing them complete freedom to practice their own distinctive form of Protestantism and farm within their closed communities. They also freely practice their own form of local government and run their own schools, banks, and businesses. The Mennonites originally established communities in large uninhabited tracts of land in the districts of Corozal, Orange Walk, and Cayo. Widely respected throughout the countryside for their uncanny work ethic, the Mennonites have turned sections of rural Belize into neat, highly productive farmland and dairies. After building a road from the Blue Creek settlement to Orange Walk, the Mennonites later founded Spanish Lookout and Shipyard. Although isolating themselves from the other cultures of Belize, they provide indispensable services and products to the entire countryside. They participate fully in the Belizean economy, mostly in the production and sale of poultry and dairy products. In addition, Mennonites craft a variety of elegant, sturdy wooden furniture sold in all Belizean districts.

When venturing into the urban areas of Belize, the Mennonite's complexion, clothes, modes of transportation and unique dialect make them highly conspicuous. Most still resemble blond German farmers; the men in dark trousers, suspenders, and straw hats and the women in conservative long plaid dresses and bonnets.

While stricter Mennonites still hold true to the belief that modern machinery contaminates their faith, more progressive divisions have incorporated engines and electricity into their lives. Traditional communities in Northern Belize include Little Belize and Shipyard. These communities still refrain from using modern farm equipment and drive horse-drawn buggies.

In contrast, the more progressive Mennonites in Blue Creek use telephones, listen to the radio, and own vehicles. Mennonites have no tourism infrastructure; however, their unique ways of life and remarkable contributions to the Belizean economy fascinate guests. Horse-drawn carriages and bonneted women along the roads of northern Belize remind travelers of the astounding diversity within Belize. With its white sandy beaches, lush rainforests and close proximity to the world’s second largest barrier reef, Belize is…