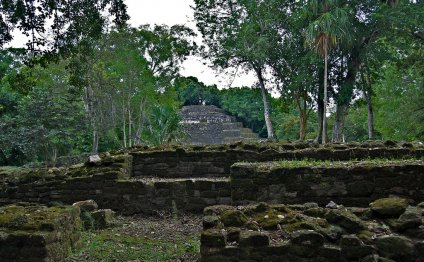 In addition to the restored ruins currently found in Belize such as Altun Ha, Caracol, Lamanai, Nim Li Punit, and Xunantunich, other large sites await exploration in the remote jungles throughout Belize. Many of these are known, but many remain undiscovered and expeditions continue each year. Belize caves are also known for the Mayan treasures that have been found deep within the earth. Caves were held sacred by the Mayans, and many contain ceremonial altars, religious carvings, and the remains of sacrificial victims.

Large communities of ethnic Mayans are found in western and southern Belize to this day, where they have lived for 2000 years.

Organizing Your Own Tour of Belize Mayan Ruins

First you will need a map of Belize that includes the major Mayan ruins in the country. You can order one from us on the form below. Then you need to decide which ruins you wish to visit. Finally, you locate these ruins on the map. Tours of ruins are arranged through lodges in the areas of the country from which they are accessed. Below is a table to the major Mayan ruins in the country, and where they would be accessed from.

Fill out this form to have us mail you a free map which includes the locations of the above Mayan ruins.

Cahal Pech overlooks the town of San Ignacio in Western Belize. This interesting Mayan royal acropolis-palace has undergone extensive restoration. Cahal Pech means “place of ticks” in modern-day Maya, and refers to the fact that the surrounding area was once used as pasture land, although this was the dwelling of a great family. Cahal Pech was occupied around 1000 BC and abandoned 200 years later.

The site consists of plazas, temples, ballcourts, residential houses, an altar, and a sweathouse, all situated in a very small area. A royal tomb was found in one of the structures. Inside the crypt a ruler had been laid to rest with the everything necessary for the afterlife: shell & bone ornaments, pottery vessels, obsidian blades, and jade artifacts, the most impressive being a jade & shell mosaic mask. The visitor center here has a dispaly of a complete model of the site, along with murals showing Cahal Pech in its heyday, and an interpretive film. Caracol is located on the Vaca Plateau south of the village of San Ignacio. Caracol is the crown jewel of all Mayan ruins in the country, and in fact one of the largest in all of the Mayan world, which includes Mexico, Guatemala, and Honduras. Caracol was completely lost to rainforest cover for over 1000 years until its discovery in 1937, so it is still being restored. It is named “Snail” (“Caracol” in Spanish) because of the numerous snail shells found there, but the Mayans called it “Three Hill Water”, making this one of the few sites where the true name is known.

The tallest structure in Belize - is Caracol's "Sky Place” at a height of 137 feet. Over 100 tombs have been found at Caracol. At its peak of occupancy, Caracol is thought to have been home to 150, 000 people – a far greater density than at Tikal. Caracol was inhabited beween 600 BC and 900 AD, with some sources claiming it was inhabited until 1150 AD. The great Caracol city-state covered an area larger than modern day Belize City which has a population of about 80, 000 at this writing. Culinary water was supplied by man-made reservoirs. One of these is used by archaeologists to this day. Explorers have discovered seven ancient roads leading to Caracol.

Caracol's ancient record provided many hieroglyphic inscriptions, enabling scholars to piece together an accurate record of Caracol’s rulers from 600 AD to 860 AD. Especially significant are descriptions of the conflicts with Tikal, located in nearby Guatemala. What puzzles archeologists is why such a large city was built in a location with no permanent water source.

Cerros is a small site located right on the Belize coast. Perched on a small delta in Northern Belize, Cerros was abandoned early and never re-occupied. There are only two Pre-Classic sites with no later additions, which makes it an important addition to the Maya record. Cerros contains five temples, several plazas, ball courts and a system of water-ways. Belize is a country located in Central America. It shares borders with Mexico and Guatemala. The official language is English…