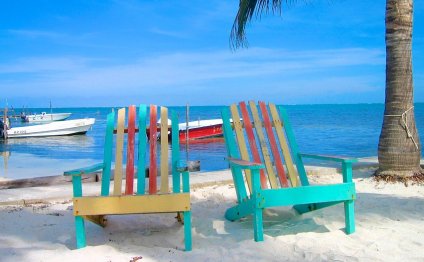 Although this small Central American nation spans less than 9, 000 square miles — roughly the size of the state of Massachusetts — few places on Earth can match Belize's diverse natural beauty. The barrier reef's turquoise and coral hues contrast with the staggering Mayan ruins scattered throughout the country's lush rainforests. Plus, it's not just the landscape, the history, culture and people of Belize are just as blended.

Belize has spent years concealed underneath the shadows of its Mexican neighbors —Cancún, Cozumel, and Tulum. But today, this Central American country beckons visitors with its thatch-roofed jungle lodges, impressive Mayan ruins, secluded snorkeling and scuba diving havens, and laid-back atmosphere. Sandwiched between Mexico and Guatemala, Belize's eastern shoreline flanks the Caribbean Sea, while its mainland extends into a myriad of wild rainforests to the north, west and south. Facing off against the sun-drenched mainland coast are hundreds of tiny islands known as cays and atolls. These islets lure travelers with swaying palm trees and cerulean waters.

Belize's largest island, Ambergris Caye, attracts the most visitors. Stroll through Ambergris Caye by day and you'll find a relaxed beachfront filled with spectacular waterfront sites; by dusk, you'll revel in its vibrant nightlife. Just be sure to save some time on the mainland for unraveling Belize's subtle charms. From its luxuriant Mayan sites to its sparkling waters, there's plenty to explore in this enchanting coastal country.

How To Save Money in Belize

Before European colonization, Belize was the heartland of the Mayan Kingdom's vast empire. The region served as a complex trade route between Guatemala and Mexico during the Classic Period (A.D. 250 to 900), and there is also evidence that the country served as a centerpiece for ceremonial practices as well. In present day Belize, there are 1, 400 Mayan sites.

By the mid-17th century, the British Empire usurped the country and brought Creoles (people born in a Caribbean New World colony) and Black Caribbean natives, known as Garifuna. Over time, Creole and Garifuna populations gradually integrated themselves into Belize's culture, creating their own customs while under British rule. Full independence wasn't gained by the country once known as the "British Honduras" until 1981.

Helpful Steps and Tips on Travelling to Belize I am a strong advocate for hiring a local guide whenever travelling. Guides have a wealth of knowledge of the destination…