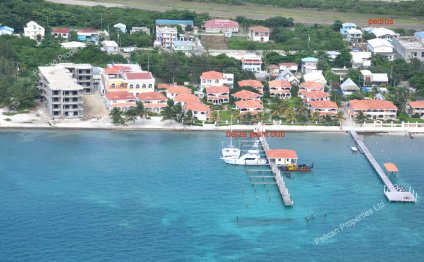 ... old jetty to watch the sunset.magical stuff. The following day we set off on a tour with the highly recommended 'Ragamuffin' tours, for a day of snorkelling the reef, the second biggest in the world behind the Great Barrier Reef in Aus. Our tour guides were awesome and typical Belizean Rastafarians and we were keen to get in the water and see what was down there. We boarded our boat and headed first to a place ...

So whilst we've enjoyed kicking back on Caye Caulker there hasn't been much to write home about. Tomorrow we are scheduled to return the keys for house and head back to the mainland, but we will however try once more to go out to the reef before we move ...

On Tuesday, I stayed home and worked on some homework, while others went snorkeling and fishing. It was good to get caught up on my work. I decided to take a break and go fishing off the dock! Robby helped me for maybe a minute but then he left. I sat there for maybe 5 minutes until I had a bite. I started to reel the line in. I caught a Snapper. It was gigantic. I had no ...

New Years day was spent sunbathing with the hostel gang on the spit, nursing a beer or two from late afternoon until sunset. Every now and then diving off the pier into the sea for a refreshing wake up. An early night was had as I would be leaving the island as early as I could manage the following morning.

... All six of us hung out all day, beach bummin at the split, swimming, talking to people, eating, exploring, and then drinking that night. They are all super super cool! This is exactly the part of traveling that I missed the most. Meeting amazing new people from all over the world that teach you so much about what I've been missing out on. All day we had such a great time just chilling, living the Belizean way, relaxed, slow paced, beautiful, malaria filled, easy day.