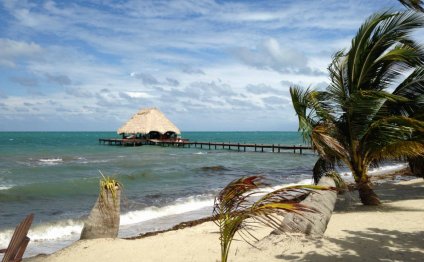 When we first started visiting Belize's Placencia peninsula more than two decades ago, small towns here were no more than sleepy fishing villages. The only tourists were serious divers and fishermen. Today, things have changed.

Just where is Placencia? It's about a three-and-a-half hour drive south of Belize City. Placencia town lies at the tip of a 16-mile long narrow strip of land known as the Placencia Peninsula. The peninsula, only a half-mile wide at its widest point, offers Caribbean beachfront to the east and a protected lagoon on the western side where manatees are often seen. Everything here is close to the water, and all along the paradisiacal peninsula on either side you'll find restaurants, hotels and small resorts, individual homes, and all those new residential communities.

In recent years especially, the Placencia peninsula has undergone a big boom. Building lots by the score have been sold to foreigners who think they'd someday like to live by the sea. (This is where you'll find the most beautiful beaches of mainland Belize.)

Beginning in 2004, condo development took off, and now some 1, 500 condos are either under construction or planned, though all this development slowed dramatically thanks to the global recession.

One reason for all this development and the changing complexion of Placencia: the road that traverses the length of the peninsula... Not too long ago, it was a rutted mess, making for a long and torturous drive. But just three years ago, paving of the road was finished from the turnoff at Maya Beach all the way to Placencia town at the southern tip of the peninsula.

Here are some fast facts about Placencia. There are basically three villages on the peninsula: tiny Maya Beach (more an "area" than a town), the Garifuna settlement of Seine Bight, and Placencia town. Only a few thousand people live on the peninsula, centered around these three small villages, the largest of which is Placencia town with about 1, 000 residents. The weather here is much the same as the rest of Belize. Average daytime temperature is 80 degrees and the average humidity is 83 percent. Generally, the dry season and the most popular time to visit is December through May. June through November is the rainy season.

On a fun note, that road we talked about earlier... it dead ends at the southern tip of the peninsula in Placencia town, which itself offers another north/south transportation artery - the Placencia Sidewalk. It's 4, 071 feet long and 4 feet wide, and according to the Guinness Book of World Records, it's the narrowest main street in the world.

As for history, the Maya have occupied this area from 1500 B.C. and you'll still see many of their descendants living nearby. As you may know, unlike the rest of Central America, Belize wasn't colonized by Spain but by Great Britain. The first Europeans arrived in Placencia in the early 17th century but it wasn't really until the mid- to late-1800s when British residents came here in larger numbers. In the late 1800s, a Scottish family settled in Maya Beach and a Portuguese family found their way to Placencia. The Garifuna people, descendants of African slaves, settled Seine Bight beginning in 1832 and they remain there to this day and speak a Creole language all their own...

What won't you find on the peninsula? You won't find cultural activities like theater or orchestral concerts. Instead, there are plenty of outdoor activities and water sports to keep you busy... kayaking, snorkeling, diving, saltwater fly fishing, whale shark watching, and more. You can take yoga classes, get a massage, a pedicure or facial at a rustic-chic day spa, or even join a bowling league at the new four-lane bowling alley.

By the way, everyone thought the expat couple that built this bowling alley was crazy-but it's now become one of Placencia's most popular hotspots.

You'll find lots of business opportunities in Placencia... it's an emerging destination for both tourists and resident expats, after all - and there are all kinds of services and business that are needed. Just find a niche and fill it...

Placencia is home to Lobster Fest every June and the Placencia Arts Festival in February. Plus, there are lots of fun casual bars and restaurants and even a few of the upscale variety. You can find a full meal in a local restaurant for a couple of bucks or you can splurge and spend more on a truly spectacular meal for two at an exotic place like Maya Beach Bistro.

For medical needs Placencia has a small medical clinic with a physician and nurse, plus an acupuncturist, a part-time chiropractor, and a natural healer. Seine Bight, and Hopkins, further north, also have medical clinics. For serious medical attention you'll need to go to Dangriga or Belize City.

The Belize Emergency Response Team provides air transportation all over the country in emergency cases.

For prescriptions, a pharmacy with limited supplies is at Wallen's store in Placencia. For years, Wallen's was the largest grocery store on the peninsula, but it now has some competition... But you may not need a grocery store. You can buy fresh-from-the boat whole fish for just $2 or $3 a pound and fillets for a bit more. (That's in U.S. dollars, by the way. Belize's currency is pegged to the USD 2:1 making conversions easy. And U.S. dollars are accepted everywhere at that conversion rate.)

So who's Placencia for? It's for those who want to get away from it all and live a Caribbean lifestyle in peace and quiet... although it should be noted that a big cruise line is now muscling into the action, much to the chagrin of locals.

how many startup fails where entrepreneurship can be applied how many system updates on galaxy s10 plus which solution is basic where do entrepreneurs work who product information how much developer to bleach how many startups registered in india how much start up capital is required where is solution explorer in visual studio how much science diet to feed dog how many science bear quests are there what is distance management what start up chemicals for hot tub which system engages in mass activation what not to design how long is a startup a startup what start up business why are standard solutions important where from teacher our is why development matters where to donate technology near me why entrepreneurs don't pay taxes product where name who roadmap snakebite how solutions are formed whose teaching is in support of education for all which management function is associated with advocacy what determines development how entrepreneur helps in economic development why london is a good place to live when set up synonym how project managers stay organized when product backlog refinement how solution priority number is calculated who teaching meaning in urdu how device is rooted where to set system property in java where to set system property in java saline solution where to buy startup costs which device is nat typically implemented on where to design clothes how many entrepreneurs fail how much business permit in quezon city when solution is saturated which device is a general purpose computing device how many product managers
Source: www.huffingtonpost.com

The Peninsula Club and Marina in Placencia Belize

Flyover of Placencia Peninsula in Belize