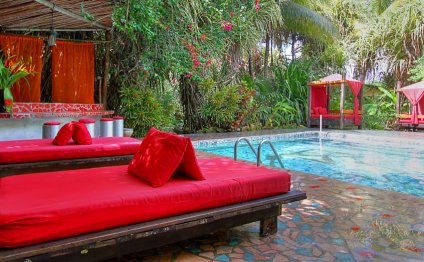 Belize contains the world's most accessible tropical wilderness. The country lies less than two hours from the southern United States, and from Belize City a 30-minute flight in a light aircraft can bring you to one of several extremely comfortable lodges surrounded by pristine jungle. Fully 60 percent of the country is still covered by dense forest, thanks to a population of just 320, 000 in an area about the size of Vermont. As well as 4, 000 species of flowering plants, among them 250 varieties of orchid, Belize has an astonishing range of wildlife. Animal highlights comprise five species of cat, including the jaguar; 650-pound tapirs; armadillos; anteaters; and black howler monkeys. The catalog of spectacular birds runs for pages, but Scarlet Macaws, Keel-billed Toucans and enormous Harpy Eagles (with 7½-foot wingspans) are close to the top of most birders’ wish lists.

Many jungles are acquired tastes. Hot, humid, wet and populated by an entire bestiary of biting and stinging creatures, they often seem uniquely unsuited to human habitation. Although there are some low-lying areas of Belize where Special Forces troops are frequently subjected to unspeakable misery and privation, many regions of the country are comparatively dry and welcoming. The thickly forested hills of the Cayo District, for example, enjoy moderate temperatures and refreshing breezes. Two of Belize’s top three jungle wildlife lodges are located here, just 10 miles apart.

Blancaneaux Lodge, in the Mountain Pine Ridge Forest Reserve, is one of two properties in Belize owned by filmmaker Francis Ford Coppola. (The second, Turtle Inn, is on the beach, near the southern town of Placencia.) Blancaneaux has an idyllic location on a steep hillside above the Privassion River, a clean, clear mountain stream with rapids interspersed by a series of glassy pools ideal for swimming. The accommodations, especially the two-bedroom villas, are spacious and attractive. Brightly decorated with Guatemalan textiles, they are well-appointed and sufficiently comfortable to please even the least hardy of travelers. Coppola’s own villa can be rented and comes with a private pool and outdoor showers. Guests at Blancaneaux may hike, ride or mountain bike along well-maintained trails through the surrounding forest. Naturalists escort bird-watching groups year-round, and from February to April, take people to admire the profusion of orchids in spectacular bloom.