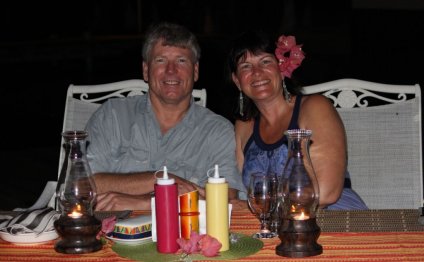 The currency system in Belize is fabulously easy for American visitors. The Belize dollar is locked at $2 Belize = $1 US. So it's very easy to see how much something is costing in US when you go shopping. Most accommodations and tours are listed in US$ prices, and most restaurants, shops, etc. are listed in BZ$. Make sure to verify if prices are in BZE or US though, 80% of them are BZE in touristy places and 20% in US. Seems like they're trying to make it easier, but it just ends up being confusing. Foreign exchange at the banks has a lower rate for selling and a higher rate for buying.

Nearly every place (both inland and on Ambergris Caye) readily accepts US currency. They also all accept traveler's checks as long as you write your passport number or driver's license number on the back. However, don't bring large bills (anything above a $20) because it could be hard to use $50 bills unless you spend $45 of it.

A lot of hotels, resorts, restaurants and businesses, particularly in the main cities and towns accept credit cards now. However, in the villages it is handy to have cash on hand for small purchases.

The easiest way to obtain Belizean currency is at automatic teller machines. These will be found at banks in Belize City and all of the District Towns. Additionally, the occasional gas station on major highways also will have an ATM. A North American bank or credit union debit/ATM card with a four-digit PIN will work at all of the Belizean bank ATMs. The currency dispensed will be in Belize dollars, of course.

Be sure to exchange your excess Belize dollars prior to leaving the country, as it's almost impossible to change outside of the country - even in adjacent border areas of Guatemala and Mexico. There is a bank at the international airport's departure lobby (before you pass through passport control), and money changers work at the land borders. Can experience such adventures off the coast of Belize, where more than 400 cayes dot the Caribbean Sea like punctuation…