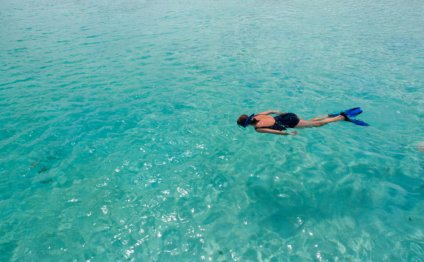 Located in the north of Belize and visible from the southeastern shore of Ambergris, the country’s largest caye, Hol Chan and Shark-Ray Alley may be Belize’s most popular dive and snorkel spots. Crowds can be problematic, but at a mere 30 meters deep and with Finding Nemo-esque underwater views, the positives outweigh the negatives, especially for diving newbies and snorkelers.

Hol Chan opens to deeper waters beyond the reef, so divers and snorkelers will be greeted with an eruption of vibrant fish, nurse sharks, rays, turtles and the occasional dolphin. The eponymous sharks and rays are the site’s biggest attraction, and you’re guaranteed an adrenaline rush stroking the stippled hide of a nurse shark streaking by (but never touch the corals). Night dives reveal a completely different world of bioluminescence, glowing green moray eels and parrotfish dozing in protective mucus cocoons.

Also tucked away in northern waters, Caye Caulker is the relaxed cousin to tourist-prone Ambergris. Solid snorkeling and dive sites like Coral Gardens are short boat rides away, as is a manatee habitat. You’re not allowed to swim with these gentle mammals, but fear not - this popular day trip typically includes snorkeling stops like Goff’s Caye and a visit to the waist-deep waters and wildlife at Shark Ray Village. Your guide may even point out delicate seahorses entwined in the mangroves.

Turneffe is the largest of Belize’s 3 major offshore atoll reefs – (the next biggest are Glover’s and Lighthouse) and is lauded for its varied features: shallow reefs, wrecks and perhaps Belize’s most diverse sea life. More than 200 nearby mangrove islands are home to species like the endemic whitespotted toadfish, reef sharks, morays, turtles, dolphins, rays and jewfish. Even mantas and pelagic (open ocean-dwelling) fish like tuna and sailfish make an occasional visit. Fishing is limited here, so lobsters flourish. Visibility ranges from 100-150 feet, yet many divers enjoy intimate macrophotography opportunities. Snorkeling pleasures abound.

Most Turneffe dive sites are at the atoll’s southern end. Elbow is a popular stop for its large fish -giant groupers, mackerels, sharks and barracuda swim against a backdrop of soft corals. Sayonara is a 1985 passenger boat wreck now adorned with starfish and clams, and is an easy dive for novices. Though they are few, Belize’s other wreck sites include the barge Changa’s Wreck (Ambergris), steel freighter Myron L (Ambergris) and the remains of British naval cutter HMS Advice, sunk in 1793 (Turneffe).

Best Diving and Snorkeling in Belize Explore Some of the World’s Best Snorkel Sites! An easy way to enjoy the underwater beauty that surrounds Blackbird is to…