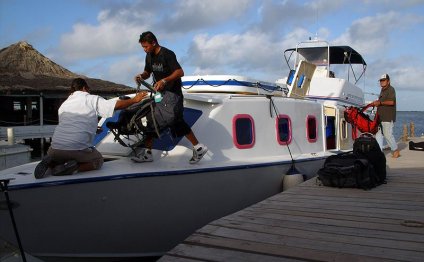 Visitors to the Caye can also take a water taxi or ferry from Belize City to San Pedro. The trip, mostly on fast open boats with twin outboard engine seating 20 or 25 people takes about 75 minutes. On a sunny, calm day, it’s a great introduction to Belize; on a rainy, windy day the trip can be wet and rough.

When you walk out the door of the airport, just smile, relax, get a taxi and tell the driver you want to go to the Marine Terminal or just say to the water taxis. The cab is US$25 total (not per person), and it’ll take 20 or 25 minutes to get there. No problem using U.S. cash. The fare is fixed, no bargaining.

It’s a nice drive, with some interesting views of the Belize River, the northern "suburbs" and then downtown Belize City. Some of the drivers are real characters and some are all business. They won’t rip you off. There’s no need to tip the driver beyond the $25 unless you have a lot of luggage, but some people do tip.

The water taxi terminal is sorta in the heart of downtown, next to the famous Swing Bridge. The area is a little funky, but safe in the day time, though there may be some street guys who’ll make a comment or two. Go in and buy your tickets to San Pedro at a little cage inside the building.

If you’ve arrive pretty close to departure time, you’ll see people giving their bags to guys who will put them on the boat, in the bow and also stand them up in the center of the boat. Or if there’s more time before the boat leaves, the luggage is sorta stacked up in a roped area. The boats, generally open with outboard motors, seat maybe 35 people in a U-shape.

If you have extra time, you could walk around a little on Front St. or go to the Image Factory, which is near the Marine Terminal and one of the best places to see and buy contemporary serious art in Belize. There is also a small Maritime Museum in the Marine Terminal. Or you could just grab something to drink and sit and wait in the terminal (not air-conditioned, though).

It’s about a 75 minute ride out to San Pedro. On a nice, sunny day it’s a pleasant trip. Nearly all the boats stop briefly at Caye Caulker and also on demand at Caye Chapel.

You come in at a pier on the front (east) side of San Pedro, more or less in the middle of town. You can walk (if your hotel is in town and nearby), or take a taxi, or your hotel will have arranged to meet you. You should tell your hotel you are coming in by water taxi and ask what you should do.

Several fast boats ferry passengers back and forth between Belize City and San Pedro.

There are scheduled daily departures to and from Belize City, Caye Caulker and San Pedro, Ambergris Caye.