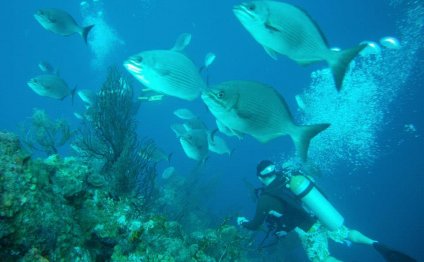 Although technically a part of Central America, a trip to Belize, with its white sand beaches and English-speaking Rasta culture, is decidedly Caribbean. A trip here is more similar to Jamaica holidays or Caribbean vacations than to its neighboring Guatemala. The clear blue sea and laid-back culture makes Belize a top travel destination, it also means it is much more expensive than elsewhere in Central America. Even as an experienced budget traveler, more money will fly out of your hands in Belize than anywhere else in Central America or Mexico. Snorkeling costs at least $40, diving gear runs $100 for a day out on the world’s second largest reef and any tour will vary from $40-80: adventure cave tours, tours of Mennonite villages, nighttime jungle tours. You need to book a tour, however, as access to all of these amazing opportunities in Belize can not be done without a guide – but if you go to Belize, you must take part in at least a couple of these tour. Skimping on these high-expense activities means factoring out the adventure and amazing natural and cultural experiences unique to Belize. What would be the point in traveling to Belize at all? Instead, it is best to know beforehand the best ways to reduce expenses in other areas in order to maximize fun and, with careful planning, stay within your budget in Belize. Here is how we managed to keep our trip to Belize on a shoestring:

But, doesn’t low season sometimes mean rainy season? Yes, in fact, it was hurricane season when we visited Belize and we did indeed get stuck on Ambergris Caye as the locals boarded up windows in preparation for a tropical storm that never came. While it might rain for part of your time if you travel during the fall, the financial benefits outweigh a few rainy days – and we were able to take part in all the activities we had planned anyway.

In the low season (Spring or Fall), prices are negotiable. In the Summer or Winter, they are not. We got two deals for hotels on Caye Caulker: at Jeremiah’s Inn we paid US$15.00 including tax (normally US$30.00 plus 9% tax) and at the Barefoot Caribe Hotel we paid US$25.00 for a double room instead of US$35.00. In San Ignacio, at Mayawalk tours, we were able to reduce our ATM tour rate from $75 to $65 each. Stock up before you go

Toiletries are expensive in Belize. If you are taking a vacation to Belize, buy everything at home before you go. If you are a backpacker or digital nomad, get your supplies in whatever country you are coming from. You will need to get a nice big can of insect repellent and sunblock – in Belize these cost us and respectively, while in neighboring Guatemala the same exact products would have cost us and . Not having to buy essential toiletries in Belize will save loads of money.

The reason why we found eating in Belize more expensive than in neighboring countries is that we did not find as many street food stalls or sandwich places as usual, and supermarkets within walking distance of hotels are anything but super, with half empty shelves and products like Pop Tarts and Kellogs Rice Crispies, but no fresh fruit or fresh orange juice, for example. As hostals are also hard to come by, preparing your own food is not often an option. Caye Caulker has one hostel, Yuma’s House, which has a kitchen. Otherwise, most nights will be spent in hotel rooms with no cooking facilities.

There are plenty of cheap restaurants – just make sure to hunt for them. We had Indian in San Ignacio for under $10 for the two of us leaving stuffed, on Ambergris Caye we recommend the Latitudes Café for cheap breakfast and Ruby’s Cafe for giant, cheap, strong coffee. If you like fried chicken, you can get a takeaway almost anywhere in Belize for cheap.

Note: The Cayes are more expensive than mainland Belize.

The public transportation system in Belize consists of the same 20 year old ‘retired’ North American school buses crammed with twice as many grown adults as the number of pint-sized school children they were meant to hold. Not the glamorous way to go, but certainly cheap and efficient. Distances are short in Belize, where a ride east to west cross country lasts only three hours, so don’t waste money on private shuttles or taxis, they charge up to ten times the price of the bus and get you there no more quickly. Tickets are cheap and the ride is most definitely entertaining – buy yourself a bottle of all-healing home-made seaweed milk, a ham and cheese sandwich and the newspaper from the vendors who board the bus, and you’re set for the trip! Couched in the tropical eastern coast of Central America, with over 170 miles of crystal blue coastline on the Caribbean… It wasn’t the low prices—I expected those. The Cayo has long been popular with expats for its low cost of living, and it…