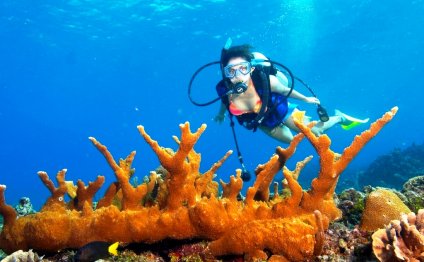 Publishing a Top 10 list is always risky, especially when it comes to listing the wealth of adventures a diver can have in a country like Belize. It may be one of the smallest nations in Central America, but it's home to the world's second-longest barrier reef and three of only four true coral atolls in the western hemisphere. During the spring and early summer months, Belize is one of the most reliable destinations for swimming with whale sharks, and it boasts the most recognizable landmark in the known dive world, the massive ocean cavern known simply as the Blue Hole.

Now factor in the topside attractions-some of the most significant Mayan archaeological sites in all of Central America, laid-back beach towns, remote island dive lodges and adventurous jungle tours. Ten doesn't even begin to cover all the reasons thousands of divers flock to Belize every year. So Belize veterans, let me state up front that there will likely be differences of opinion, maybe even a few glaring omissions compared to your own list-and that we should get together soon over a cold Belikin or three and hash them out. Until then, go to and post your own list, because I'll bet we can agree on this: Belize is one great destination, no matter how you add it up.

Hol Chan is Mayan for "Little Channel" and refers to the deep cut in the barrier reef off Ambergris Caye (#3). It's the access point to dive sites outside the barrier reef, and the center of the three-square-mile Hol Chan Marine Reserve. In place since 1987, the park is actively patrolled to enforce the rules: no anchoring, no touching the coral and no fishing. The aggressive protection has paid off in the form of abundant marine life and healthy stands of elkhorn coral-a rare treat. Though only about 30 feet deep, the cut is a must-see dive. The current can be blistering, but hanging out with the dense schools of jacks, grouper, snapper and barracuda massed along the walls is worth it.

Leave the tank behind and bring your snorkel for the most famous site in the reserve, Shark Ray Alley. This shallow sand plateau inside the barrier reef was once the place where fishermen would clean their catches. All the discarded chum naturally attracted swarms of nurse sharks and squadrons of stingrays. Today, dive guides dole out fish scraps to lure in the sharks, rays (and anything else that happens to be swimming by) so you can get the close-up photos of a lifetime.

In a country filled with exceptional dive options, Ambergris Caye is the most popular spot for three simple reasons-location, location, location. The largest of 200 cayes that dot the coastline, it's just a 20-minute plane ride from Belize City. It's also the closest you can get to the Belize barrier reef. From any of the dockside dive shops you're never more than a few minutes by boat to a great dive on the deep spur-and-groove coral formations that shelter the island, or to the Hol Chan Marine Reserve. Topside, San Pedro is one of those quirky, laid-back beach towns that divers take to instantly. Thanks to a just-right mix of waterfront restaurants, bars, internet cafes, ATMs and small stores, you have all the conveniences of home while still reveling in that world-away feeling. Belize veterans may be surprised to learn that just this year they actually put paving stones over the old sand streets, but no worries. Golf carts are still the preferred mode of transportation, and some of your favorite establishments still have sand floors and a shoes-optional dress code.

The Belize barrier reef, the largest in the western hemisphere, stretches north to south along all 190 miles of the coastline, sheltering the interior cayes and providing divers with countless opportunities to explore. The reef runs closest to shore near Ambergris, slowly arcing away as it heads south. Dive operators from the cayes and Belize City specialize in taking divers through the deep coral canyons built by staghorn, elkhorn and brain corals. Many dive sites start in as little as 45 feet of water, but they can drop to 90 feet or more. Marine life includes all the usual Caribbean reef fish suspects, from tiny tropicals to reef sharks and turtles. The barrier reef is also home to the whitespotted toadfish, a species found only in Belize. It likes hiding in reef crevices and is easy to miss if you don't know where to look, but dive guides here are adept at finding them. They even have a special hand signal for it-fingers wiggling under the chin-in imitation of the fleshy growths on the toadfish's face.

Belize's first dolphin encounter is now operating at a custom facility on Spanish Lookout Caye, located just a short ride from Belize City. Hugh Parkey's Belize Dolphin Experience takes place in a natural four-acre lagoon and is more than the usual watch-Flipper-do-tricks show. "It's natural behaviors that we put on display, " says Aggie Obama, director of marine mammals. In addition to learning about the habitat and natural history of dolphins, guests also get hands-on interaction with an educational twist-feeling the dolphin's heartbeat, learning how the trainers and staff monitor the health of the animals, and how they keep the curious cetaceans mentally stimulated.

Scuba Diving with Dolphins in Belize Become a Member Be a part of the private sector regulatory body for Real Estate Business in Belize. Receive up-to-date information… There s a lot to do in Belize, from visiting the Mayan sites of Altun Ha, Cahal Pech, Lamanai and Xunantunich to cave tubing…